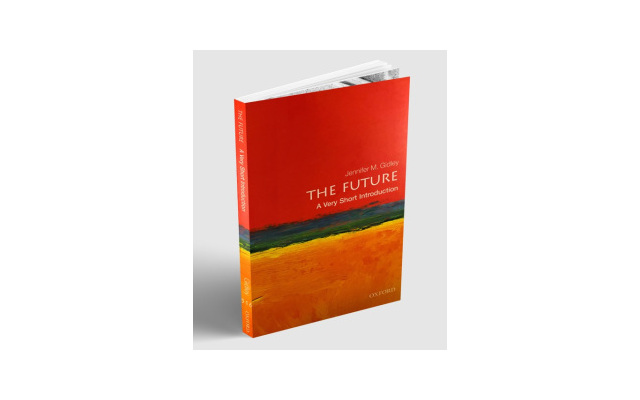 “The Future – a very short Introduction” published 2017 at Oxford University Press written by Jennifer Gidley is a book in which the author takes on the challenge of giving the reader an overview of the diverse topic and term future – how it has and is perceived and dealt with. The author, Jennifer Gidley is a renowned futurist, educator, and psychologist. She was the president of the World Futures Studies Federation from 2009 – 2017 and her field of expertise is on “futures of thinking” with the focus on postformal education and psychology.

The introduction prepares the reader on the richness that can be expected in the book. It leads right into the first chapter where Gidley takes us 3000 years back in time. She gives a well researched overview of the historical perceptions of future and the thought models behind them – starting in the early times of prophecy and divination-orientation on to the ancient philosophical ideas and the first “human-centered utopian visions”. Further the book describes the Renaissance as a time of imaginative minds that lead into the Enlightenment, the great transformation in human thinking. Gidley point out that it inspired the two perceptions of “human-centered futures and technotopian futures”. The industrialization in the 19th century she describes as a time when future was mainly equated with technological progress but also the beginning of dystopian thinking. This first historical recap ends right after WWII, when in 1945 the RAND Corporation was founded in the USA, with its strategic approach and the aim to plan the future of the Cold War era.

The next chapter Gidley starts by explaining briefly that she actually would have liked to use the plural form futures in the book’s title only her publisher insisted on the singular future. Without this dissent the reader might have not received the following encompassing facts and thoughts on how the idea of multiple futures arose. As Gidley herself discloses: “It also encourages me to articulate the emergence of the concept of multiple futures in the 1960s and to explain why pluralism is important for the democratization of the future.“ (pg. 44)

Starting in the middle of the 20th century she tapes into the scientific perception with its positivistic empirical claim and the idea of predicting and controlling future through methods of forecasting. Gidley focuses on the historical developments and the changes in research methods foremost in the USA and Europe. Especially the latter experiences a transformation in the social sciences in thought models towards the idea of “multiple knowledge”. Gidley says: “By the end of the 1960s many theorists no longer considered positivism to be a plausible theory of knowledge, […]. A central feature of post-positivism, broadly defined, is pluralism.” (pg. 52)

She states, that the research methods mirror this development from exploring the one probable future towards a methodology of trying to understand the various possibilities of multiple futures. This notion explores participatory methods to include stakeholders in the process. Gidley indicates that both thought models and the research methods are still part of the discourse in futures studies. That for example trying to predict the probable future is “[…] still a powerful mode of trying to come to terms with uncertainty.” (pg. 50) She indicates that the field has diversified, including scientific research approaches next to business consultants with the aim to make sense of an unknown future.

In the next chapter Gidley gives a comprehensive overview of “the evolving scholarship of futures studies”. Especially for students of futures studies, foresight, and the like it opens various paths that the field has to offer. Indicating the developments, Gidley lists five main directions: “Predictive / empirical, critical / postmodern, cultural / interpretive, participatory / prospective, integral / holistic”. She acknowledges that all still have their entitlement depending on the context and that they often are intertwined. Each direction the author connects with names of renowned futurists. It becomes a rich resource for further exploration.

After creating an understanding of the research field, Gidley critiques how the media often displays futures studies, supporting the picture of the fortune tellers who predict a future. Thus, the expectations towards the field in public often cannot be met, as nobody knows what the future may bring. In the same chapter the author also looks behind the prejudice of future only being viewed as a time of technological progress linked today with robotics or the idea of transhumanism as the mechanical, technological enhancements of the human species. For example, Gidley argues that “human intelligence” encompasses more than logical reasoning, which makes the term artificial intelligence (AI) debatable.

This thought leads into the next chapter, where Gidley as a psychologist and educator questions the focus on the advancing technology and the lack of developing our inherent human intelligence and consciousness. She argues that the speed we have taken up is overwhelming and that globally an increasing need to slow down can been found. In her reasoning the technotopian view claims to benefit all but often profit only a few. She poses the question „Is it possible that the obsession with techno-enhancement is preventing us from consciously evolving our inherent super-human potential?” (pg. 112) In the book Gidley takes the side towards a human-centered transhumanism i.e. the evolution of people’s minds and consciousness to finally benefit all of humanity.

In the final chapter Gidley further discusses the global challenges we are facing – such as climate change and the increasing poverty, the discord between the global north and south. Gidley understands education as a strong pillar to cope with what may lie ahead. She argues for a postformal education to support the idea of schools and learning media encouraging agility and include cultural differences. As she declares here, the formal mechanistic educational system that produces workers for an industry will not solve the issues ahead: “… more complex, self-reflective, organic ways of thinking will be vital in reshaping education, so young people are better equipped for the complexity, paradox, and unpredictability. We urgently need new forms of education based on new thinking, […]” (pg. 131) To strengthen the argument of futures-orientation being part of this idea, she links the five directions in futures studies to approaches that may support problem-solving in a time of ecological crisis.

This pocket-size book with over 160 pages gives the interested reader an amazing overview on the topic of future and the research field of futures studies. The references and a section on “Further reading and websites” complement the text. The rich knowledge and the packed information of ideas, dates, and names is especially helpful for anyone working in the terrain of futures studies as well as students in the field to connect the dots of the many international strains, which often seem so disconnected. Though for non-futurists this may partially be a bit overwhelming.

To me the value of the book also lies in the fact, that Gidley is not afraid of clearly stating her opinion that futures studies and the perception of future(s) needs to keep on veering away from prediction and dystopian imagery and to take up the global challenges ahead. She defines the field as: “Futures Studies is the art and science of taking responsibility for the long-term consequences of our decisions and our actions today.” (pg. 136)

This might not be congruent with all researchers or consultants in the field of futures studies or foresight but from my point of view there are enough books arguing that technology may be the saver being contrasted by dystopic pictures to fuel fear and depression. As Gidley states: “[…] A sense of fear and hopelessness often comes from not knowing enough. By introducing the challenges, hand in hand with the many alternatives and counter-trends, I want young people to feel inspired and empowered to change the trends they don’t agree with. I want them to think creatively and imagine alternative futures that they could design.” (137) To me the book is a success in introducing various views on future aspects and ending on a note that is encouraging and enabling.

With our project beFORE in mind, we may create an educational tool that fits into the vision of Gidley: to convey not simply foresight methods but in terms of Futures Literacy (Riel Miller 2007, 2015) give our target groups the courage and the motivation to step out of their mental structure and try to see other perspectives of futures. The courses could enable them to be critical as well as creative – to use the future as a tool to change a present situation and act responsibility for the benefit of the many.